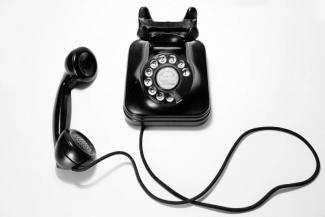 What can your business telephony system do? Or to put it another way, is your business phone setup just there in the background, seen merely as a necessary expense; or are you actively using it to really drive your business forward?

In other words, have you been ‘thinking outside the box?’ Thought to have originated in the early 1900s, being connected with a join-the-dots puzzle; the idea of thinking outside the box jumped into mainstream business thinking some fifty years ago. It crops up a fair bit in innovation theory. But the fact that it has almost become a cliché makes it no less relevant; particularly if you see it as being a call to really examine whether you can do more with existing resources.

Thinking outside the box could certainly be applied to researchers at the Massachusetts Institute of Technology (MIT). When faced with the expensive option of deploying multiple sensors to track the structural integrity of bridges, the researchers set out to see if a mobile phone app could do the same job. Initially experimenting on the Golden Gate Bridge, the research has since been expanded to other bridges in the USA and Italy.

The results reveal that the individual vibrations set up on bridges by traffic movements can be identified by mobile phones; meaning that the structural integrity of the bridge can be monitored with an app set up on the phones of multiple bridge users. Not only is this far cheaper than deploying sensors on each bridge, the MIT researchers estimate that mobile device monitoring could trigger early interventions, thereby increasing the lifespan of bridges by fifteen to thirty percent.

It's an interesting example of the way in which a simple telephone can be so much more. Admittedly, something as extreme as this may not be called for in many business models but it does beg the question of how could business phone systems be leveraged to benefit the business. Let’s consider call recording services for example.

It is important to ensure that any recorded calls are pre-advised and managed in accordance with the regulations. But let’s say that you are recording calls ‘for training and quality purposes.’ Are you optimising those recordings, using them to not only identify an individual training need but also to understand the nature of calls, to identify patterns which could point to some failing in the overall offering of the organisation. If there is a spike in calls relating to a particular service or product there could be a quality issue which regular monitoring could pick up before it gets out of hand.

Or what about your business phone number? Do you still use the legacy number which you first had when you set up in business? Or have you explored the way in which using different local, national, or international numbers, perhaps in tandem with a targeted marketing campaign, could help to reach a range of new customers?

Callagenix’s range of flexible phone solutions could help to open up business telephony interactions with customers and suppliers. If you would like to learn more about our phone services for business take a look at our website or give us a call.